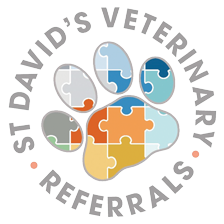 Dan qualified from Cambridge University in 2002, since when he has found the challenge and satisfaction of surgery increasingly appealing.

He passed the exams for the RCVS Certificate in Small Animal Surgery (CertSAS) in 2011, allowing him to register as an Advanced Practitioner in Small Animal Surgery. Seeing a busy surgical caseload at St David’s Veterinary Hospital in Exeter since 2007 has allowed Dan to become very experienced in general orthopaedics, all types of fracture management and stifle disease (such as patella luxation surgery and TTA for cruciate rupture). He is also very experienced in soft tissue procedures, such as Total Ear Canal ablation (TECA) for chronic ear disease, and in airway surgery, such as BOAS procedures in Brachiocephalic dogs. He welcomes referrals in all these areas.